Real Good News in a World of Fake News

These popular radio segments are produced by Dudley Anderson.

Veteran broadcaster and IGO member, Dudley Anderson was born and raised in Johannesburg, South Africa. Dudley became a Christian at the age of nine. After graduating from Bible College in 1993, with an already established ministry as a worship leader, he entered Christian radio broadcasting and was heard on two prominent radio stations across South Africa. In 1996 Dudley and his family felt called to the United Kingdom. Here God opened the door for him to broadcast via an international radio ministry across central Africa, reaching millions of people on FM, shortwave and the Internet.

One of the radio shows Dudley produced was a 2-hour music show called, On Track. Along with good music, On Track featured several inspirational thoughts, interviews and teaching segments. When listeners asked for a written version of the content of On Tack, Dudley Anderson began producing a weekly e-mail update. Gradually, these emails evolved into the free weekly e-devotional called, GodTracker. Long after On Track had gone off-air, the weekly GodTracker e-devotionals continued to interact, impact and influence people all over the world to be real followers of Christ.

Dudley Anderson continues to publish the weekly e-mail devotional, GodTracker via godtracker.co.uk . These devotionals are also posted on several Internet blog sites, where they enjoy a wide readership. Dudley has published two devotional books, based on GodTracker. These are called, God-tracking Through the Year – year one and year two. He produces short weekly radio spots, also based on GodTracker. These include Sixty-Second GodTracker and God-Tracking with Dudley. These spots are heard on many radio stations across the world. Dudley also produces a half-hour radio talk show called, The Reality, which features people from all walks of life who have been impacted by the reality of known Christ as Lord.

Dudley is married to Karen and has two adult children, Ryan and Kerryn.

Read and subscribe to the e-mail devotional, GodTracker for free... 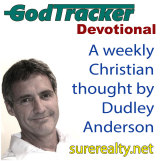